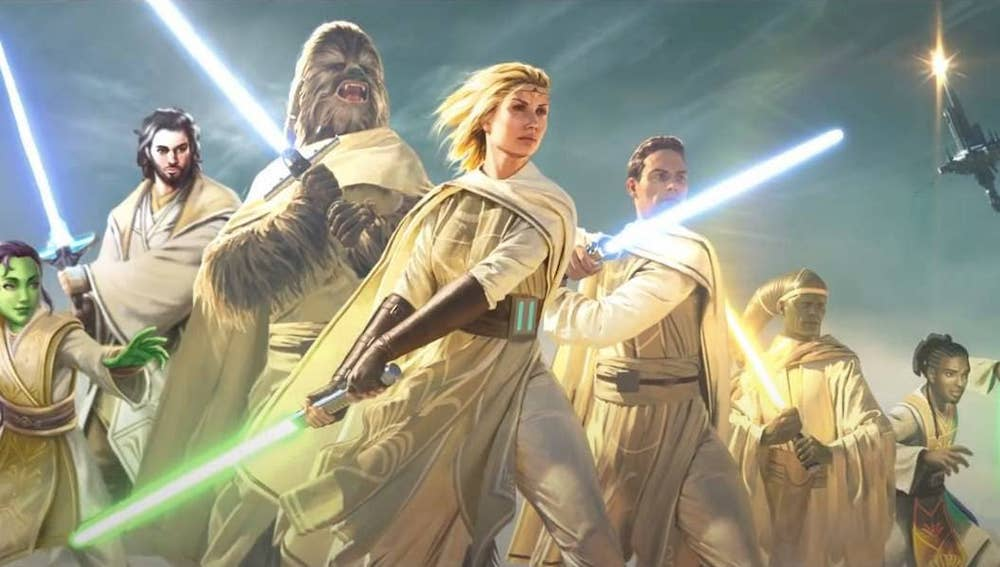 Cavan Scott is kicking off the Shadow of the Nihil storyline with it’s first chapter Jedi No More, and I for one think this is the best hook to the beginning of a comic in a while. The Drengir have been defeated and it feels like a breath of fresh air. The first eight issues had covered the insidious darkside flora, but now that it’s been revealed it was all a red herring for Marchion Ro’s schemes, it truly feels like we’ve entered the next chapter of this tale. And who doesn’t love a good high stakes undercover thriller?

We follow Keeve and Terric as they try to infiltrate the Nihil and gather some solid intelligence on the band of pirates. At this point, the Jedi still think Lourna Dee was the Eye, and furthermore that she died. As a reader it hurts to see how wrong the Jedi are and how many steps ahead Marchion Ro is. However, I have to say the standout selling point of this issue is the art, specifically Ario Anindito’s depiction of the world. Once, these things were just words on a page, his work goes a long way in bringing the entire era to life. From Orla Jareni to the Ataraxia and even the Talpini Tempest Runner Zeetar who has been revealed to survive his wounds he took in The Rising Storm, it is beyond cool to actually SEE the High Republic. So to sum it up, this issue had tight action, great dialogue, beautiful art and a killer cliffhanger featuring a pretty beat up Myarga the Hutt, what more is there to want?

Back Together And Away Again is the next installment of Daniel Jose Older’s Adventures run. Our characters have grown, as denoted by new hair and slightly different outfits in peak star wars fashion. Not only have they changed appearance canonically, but artist Toni Bruno has taken over pencilling for Harvey Tolibao, whose unique style was seemingly a polarizing one, one that I grew to love I might add. However, the new art style captures that same breath of fresh air vibe as I mentioned before: the story is moving forward.

The High Republic is on the move, the Drengir and Nihil as we knew them in Light of the Jedi are in the rear view mirror, the Authors are shifting new pieces into place and it’s extremely exciting. We pick up months after the attack on Valo with what I’m calling the “Crashpoint Crew,” Lula, Ram, etc. reconvening with our heroes of Nal Hutta, Farzala and Qort (also joined by returning character Ishnar!). Meanwhile Krix has shaved part of his head and fully committed to the Nihil, tasked by Marchion to attack who else but Maz Kanata! Our Jedi heroes are tasked with stopping Krix’s rampage and so we are set on the path to confrontation on Takodana. Oh and also, how could I forget, we meet Kyuzo Jedi badass Sav Malagan who loves drinking coffee and taking names. If you want fun action, character development, and the wonderful light hearted tone that separates Adventures from the rest of the increasingly depressing High Republic, then this issue is for you!.

Thanks for reading and come back next week for the next tentpole chapter in the War of the Bounty Hunters!