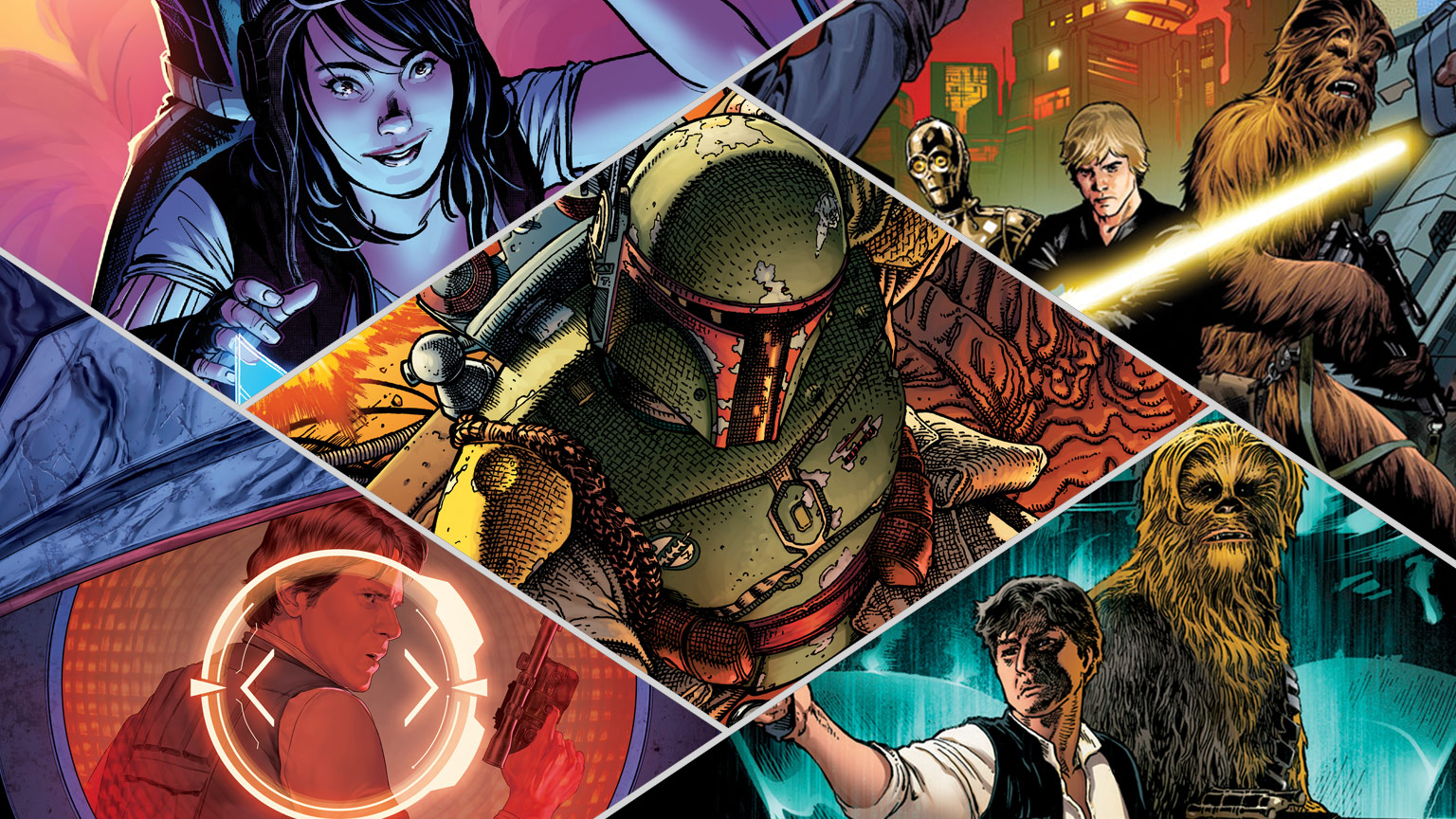 War of the Bounty Hunters is back! Did you miss it? I know I did. It’s been an agonizing two weeks since Ochi & Vader last graced the page, taking on Crimson Dawn across the outer rim in their crossover issue #15. But now, the main miniseries has returned in full force to kickstart this month’s slew of all things bounty hunters! Additionally, Doctor Aphra comes back this week for another tie in that brings in a fresh take on the series art. Unfortunately though, the loveable rogue finds herself being relegated to second fiddle this week as War of the Bounty Hunters #4 hogs the stage. So without any further adieu….actually, I have some thoughts to share:

These issues are exactly what the series needed to get the blood pumping again, but brings me to remember a depressing reality about the nature of the comics medium: it’s too slow. It’s simply too slow and it’s tragic. Sometimes it takes large chunks of the year to tell stories that are only 100 pages long. It is far too easy to lose sight of the bigger picture, the larger whole of the storytelling. It’s easy to forget that this miniseries alone gave us things like Boba Fett arena fighting in black armor on Nar Shaddaa, Bossk getting his legs blown off and the return of freaking Qi’ra for petes sake.

As the months go by it starts to get blurry, but I can’t wait for it to be done, collected in a succinct trade paperback that I can point to as pure Star Wars comic excellence (especially to recommend to new readers). The pacing problems melt away when a story is read as it’s intended. You don’t watch one movie in 6 parts across 5 months, at least I don’t. Basically my point is, stick with it, I know it feels like it’s dragging sometimes, I feel that way too. But remember The Mandalorian Chapter 10? It’s exactly like that, people were bored and confused. Once though, as an audience, we could see the full picture and the artist’s intent, The Mandalorian season 2 was heralded as the greatest Star Wars thing since 1983. So now, in *checks notes* the fourth part of the first part in a planned trilogy of stories, put some faith in Charles Soule and sit back to enjoy the ride. PSA over.

War of the Bounty Hunters #4

Attack At Dawn has it all: Bounty Hunters, X-wings, Tie Fighters, the Falcon, Sith Holocrons, and so much more! This issue feels cinematic in all the best ways, and I hope this showdown at the Vermillion is referenced in the upcoming The Book of Boba Fett, how cool would that be? We pick up right where issue #3 left off and get some delicious dialogue between our rebellion heroes as Vader seizes Han. Soule has the main characters of Star Wars dialed in like no other author. I can always hear the lines as if Billy Dee Williams or Carrie Fisher were reading them aloud, it’s no wonder Soule has written stories for everyone from Anakin to Poe Dameron, the man just gets it. Meanwhile, Bokku and his fellow Hutt cronies are insulted by Jabba’s deference to Vader, and begin to plot their inevitably ill-fated revenge where they tragically all perish and Bokku gets a dying one-liner leaving Jabba to be chief Hutt by ROTJ.

The real meat on the bone here though is the long awaited rematch between Boba and Valance, also featuring the hilariously unlucky Dengar. The fight is awesome and the dialogue matches in quality. Fett isn’t playing around, eventually convincing Valance they should work together to claim Solo regardless of their beef…I’m sure that goes well. The story caps with yet another stroke of bad luck for one of our favorite “simple men making their way through the universe” that has me on the edge of my seat for the final issue! Oh and Qi’ra is using Dryden’s Sith Holocron?! Say what now?!

Repeat Offenders by Alyssa Wong rather ironically retreads a lot of the beats of the prior tie in issues. It still offers some fun Star Wars action, but is bogged down by the new art style which has yet to grow on me. Federico Sabbatini’s take on Aphra is light and vibrant, almost like anime or manga, a far cry from the dark and realistic take of Salvador Larroca that brought the character into existence. It isn’t bad by any stretch of the imagination, it’s just not something I’m used to, and I eagerly await to see what Sabbatini brings to the table as I get used to his style. The story revolves around our two power couples Just Lucky and Ariole along with Sana and Aphra busting out of their cell. That’s pretty much it. They get out, see Qi’ra, then get jumped by Deathstick who has made it a point to appear in the most last pages of a comic book of any Star Wars Character. Seriously, she has become the ultimate closer, dropping from the ceiling to end a comic like Jamie ending a podcast. As much as it seems as if I was down on it, I would still call it was a good read. The lighter art style lends itself to cartoony action, making it easy to follow and on the eyes. Ultimately though, this issue did feel sidelined by its far more consequential counterpart.

Thanks for reading and come back next week for issues starring Vader and Boushh as the War of the Bounty Hunters tie-ins continue!