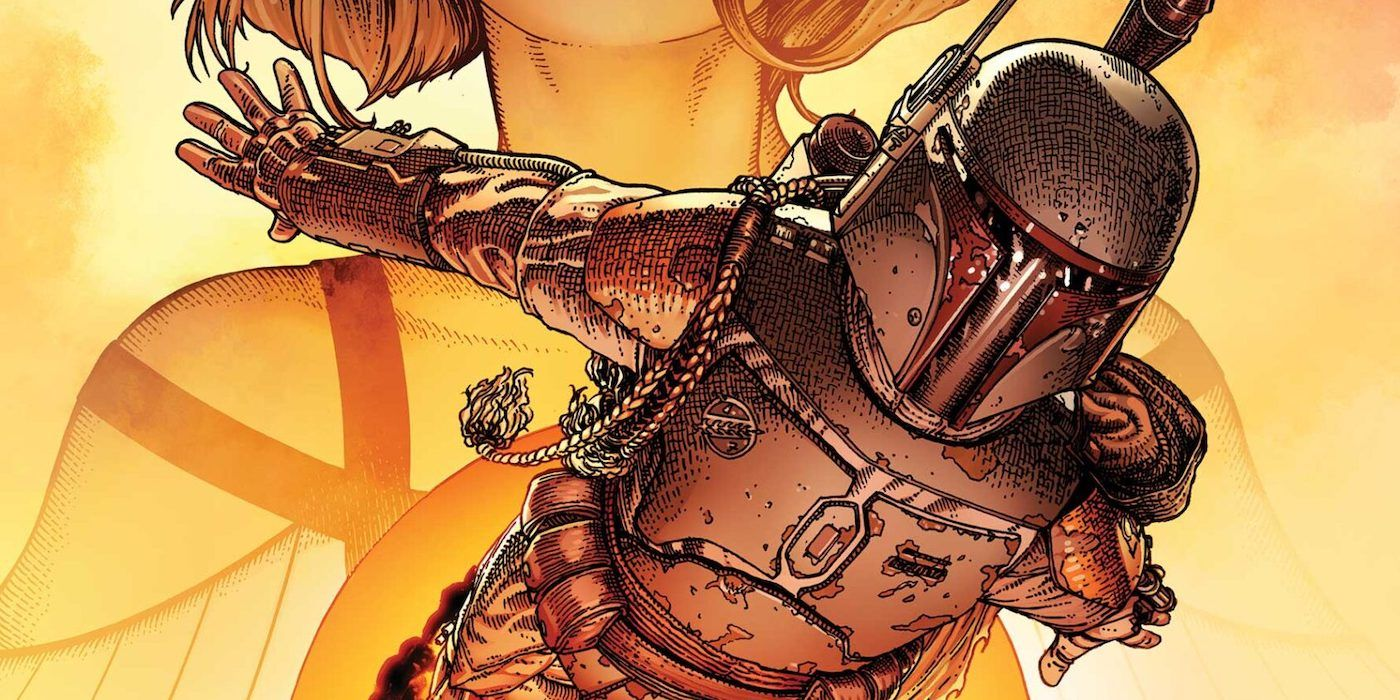 Wowza. What. A. Round-Up. The past two weeks have delivered some of the finest panels Star Wars comics can offer. When War of the Bounty Hunters wrapped its mini, I decided to wait until after The High Republic #10 released to cover it. I figured it’d be boring to do a round-up on a single issue after covering the stacked previous week…boy was I wrong. You could easily write a dissertation in Lourna Dee badassery from just issue #10 alone. On top of that, if you somehow forgot, the spooky, moody, and absolutely groovy Trail of Shadows started too! Also, there was a crazy cool Dr.Aphra issue! Most importantly THERE’S A CAT KNIGHT OF REN NOW! It could be a dog, BUT STILL! Okay enough of the intro, let’s jump in!

War of the Bounty Hunters #5

We made it, the wait is over, War of the Bounty Hunters has concluded, but just when you thought you were done, BOOM, this is actually a year plus long event that’ll take us deep into 2022 with The Hidden Empire (the newly announced finale to this “Qi’ra trilogy”). Charles Soule and the whole team at Marvel Comics are shaping the time between Episodes V and VI like we’ve never seen it before as the Galactic Civil War adds another faction, Crimson Dawn. I took some time to reread the miniseries as a finished product before writing this and it did not disappoint. Just as I theorized over a month ago, I was able to appreciate the story far more as a whole rather than in spread out chunks. From the opening on Nar Shaddaa to the finale on the Executor, War of The Bounty Hunters was a damn good time. “But what about this issue specifically?” you say, well it was also a damn good time. Valance and Boba make for a great dynamic bounty hunting couple in terms of both dialogue and action. Their battle with the KX droid was thrilling, and Boba’s subsequent betrayal was equally as satisfying, delivering a killer Tem one-liner as he walked away from Valance’s blown open body. Vader’s brief appearance brought back some of that Rogue One hallway magic as our favorite Dark Lord executes the Hutt Council on the Emperor’s behalf, a story might I add that we’re getting fleshed out in the next Darth Vader issue! Most importantly, Boba finally delivers Han to Jabba and the story opens up once more as we see a splash page of colorful rogues featuring such folks as Ren with Knights in tow and Imara Vex (she’s from the recently announced Star Wars: Hunters game) working for Qi’ra. What does it all mean? We’ll just have to wait and find out.

This is the kind of Dr.Aphra I absolutely love. Betrayal, artifacts, brutality, and all of it wrapped with some morally questionable heart and flavor. Alyssa Wong hyped this issue up and Party Favors delivers. Now, for whatever reason, the art has switched back to the care of Minkyu Jung. For the record, I preferred this art style anyway but it’s still strange that only issue #14 of an ongoing series is done by someone else. Anyway, it’s beautiful and I love it, especially paired with what Alyssa wrote. Yet another cooky Deathstick fight is capped off with Aphra tapping into an ancient mind controlling Ascendant artifact and making Deathstick and her Crimson goons stab themselves! It’s just as wonderfully nuts as it sounds and brought some excellent moral stakes to the issue. Afterwards our two power couples pull guns on each other and their right back in the mess! The standoff banter is superb, and I must admit Just Lucky and Ariole Yu are starting to grow on me. Aphra and Sana skedaddle on out of there and uncover Qi’ra’s galaxy spanning network of contacts that’s about to spring into action! The final page depicting this reveal is gorgeous and I can’t wait to see how this plays into Crimson Reign.

Hot diggity dog they just don’t quit do they? Daniel Jose Older delivers one of, if not the best start to a Star Wars comic story. The “Shrii Ka Rai Ka Rai” lullaby is as haunting as it is catchy, and the way it’s woven throughout the narrative, from the very first page to last, is a wonderful hook for this miniseries. Sian Holt and Emerick Caphtor are the noir Star Wars leads I didn’t know I needed in my life until now. Two loveable detectives from two very different walks of life, fated to cross paths in a case bigger than they know…Swoop City anyone? Just kidding. Sian playing in the band was just delightful and I could practically hear the page. Emrick’s skepticism around the death of Loden and the entire investigation is fascinating, the fact that the leveler even eliminated his midichlorians is thought provoking to say the least. The choice to cross cut between our heroes stalking the underbelly of Coruscant and raiding Vrant Tarnum made for an issue that never missed a beat. The battle splash page was captivating and that final panel…my goodness a mystery is afoot! Now because it’s all still a mystery to the audience I don’t have too much else to write about plot wise, but darn is there some great ambience. Every panel is cinematic, it feels like I’m watching a 50’s noir, or even Rian Johnson’s breakout hit neo-noir Brick. Overall, just go read this issue, it has to be experienced to believe its awesomeness.

Last and most certainly not least, Cavan Scott continues to kill game with his story Out of Balance, Out of Time. Keeve and Terec continue their undercover operation into Zeetar’s tempest, and have been confronted with someone who can blow their cover, their former and rather unsavory ally Myarga the Hutt! Speaking of Myarga, poor poor Myarga, woof does she take an absolute beating. The whole High Repubic run has been weirdly heavy on grotesque Hutt stuff. First the rotting corpse splash page, then the Drengir chest burster, and now torturing and murdering Myarga (may she rest in slime), but not before revealing to the Nihil the Jedi in their midst! After some intense battling, who better to steal the show than the Tempest Runner herself, Lourna Dee. Not only does she kill Myarga in the most nonchalant way, she came with the Leveler itself, or at least some part of it, to turn Terec into literal ash. My one and only gripe with this issue, if you can even call it that, is the fact Dr. Uttersond and her entourage all have on these funny shades, and Uttersond specifically looks like he’s the kind of guy to say “gabagool.” Definitely just funny and not actually bad in any way. Anyway, this issue was a riveting ride of tension, torture, and a classic High Republic cliff hanger. It was much enjoyed.

Thanks for reading and come back next time for another massive drop as we have four issues (as of writing) slated to come out this week alone! With any luck, we should finally see the long awaited meeting of Leia and Qi’ra in Star Wars #18 and I think we’re in for quite the treat. So long reader, until the next one!