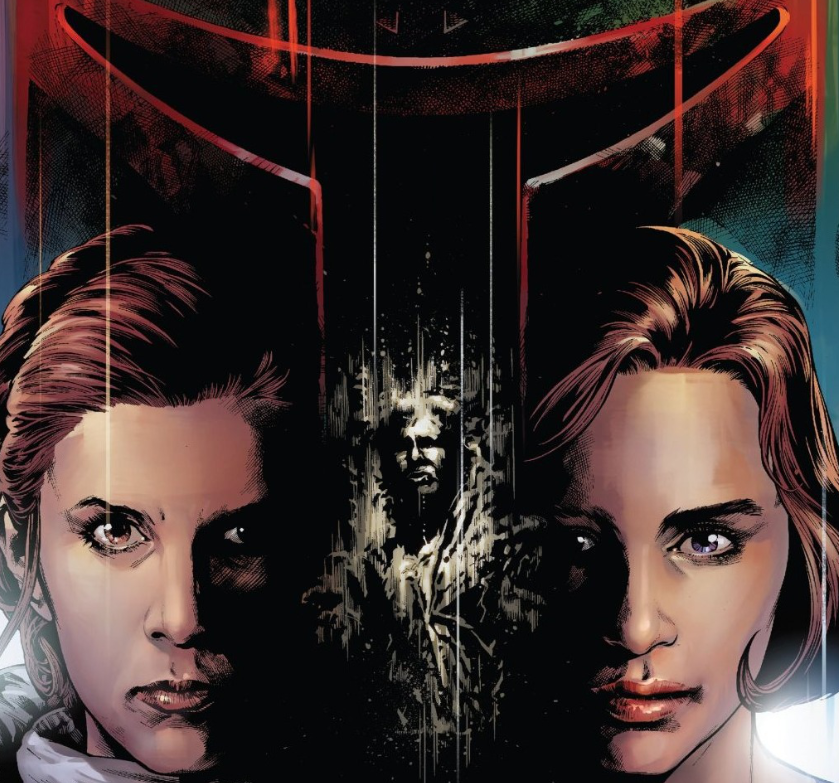 It’s not often that the cover of a comic actually delivers on it’s usually exaggerated promise, but well, here we are with a bunch of awesome comics with equally badass covers. From Keeve Trennis to Qi’ra, this round-up has some serious Star Wars goodness! To start, the final four issues of the War of the Bounty Hunters crossover served as an epilogue to the event, putting a bow on many plot threads while seeding even more for comics yet to come. Then, The High Republic delivered some exciting continuations of its story, however, I’m starting to feel the pain of waiting for Phase 3, the next big push in the narrative coming January. We have a lot to cover so there’s no point in waiting any longer, let’s jump in!

Charles Soule stated that the Star Wars run would be having some more character focused issues as we emerged from WOTBH, and he wasn’t lying. This whole comic was essentially just “doing talking”. A conversation, that’s it. One, AMAZING, conversation that is. Just wow, talk about a testament to Soule’s skill, because this is it. You really have to read it to feel the weight of the dialogue and understand it’s implications as we race towards Return of the Jedi. Leia and Qi’ra are the obvious standouts as these two titans go head to head in a game of verbal chess. To see Leia at what is likely her lowest point, about to lose hope, and to have who but Qi’ra come and spark it again is a stroke of narrative genius. It’s like watching Leia battle her evil twin from another dimension, it’s surreal. More importantly, we get to see Qi’ra’s honed killer instinct, and why she deserves to be the crime lord she is now. Her every word revealed more and more the sad reality that her relationship with Han was doomed to fail. Everything you see in her eyes as she abandoned Han at the end of Solo, you feel in her words here: The regret, the remorse, but most importantly the resolve, the fact she’d do it all again in a heartbeat. I don’t know if I believe the tale she spins Leia, but that’s part of the beauty of it. Her goal is to destroy the Sith, free the galaxy so no one will ever have to become like her again, and she’ll do anything, sacrifice anyone, to reach that end. It’s a classic Star Wars tragedy if there’s ever been one. This issue is an all time great and a shining example of why I love Star Wars comic books.

Put simply, this is Star Wars pulp and camp at it’s finest. Greg Pak continues this arc of pleasantly over the top Darth Vader issues with Just Rewards. By direct command of Palpatine, Vader slaughters the Hutt Council, leaving room for Jabba to claim sole Hutt power and further explain why his death in Jedi had such a powerful effect on the underworld. The highlight of the issue though yet again, who guessed it, is Ochi of Bestoon. Vader, now tasked with hunting down Crimson Dawn, sends Ochi to recruit the league of assassins for his crusade. So a couple of things: For one, the fact that the galaxy far, far away has a league of assassins is pretty darn rad. For two, Qi’ra is there! Say what now? And then Ochi joins Crimson Dawn?! Okay so now for some theorizing. I fully believe this to be Kingdom of the Crystal Skull “Mac” situation. We know Ochi to be loyal to the Emperor in the time of the sequels, his loyalty always being to the Sith and their power. After seeing and literally being blinded by Exegol, I doubt Ochi’s belief in the Sith can ever be shaken and as such, he’s a definite double agent. Palpatine or Vader is likely using him to get close to Qi’ra, hell, it could even be Ochi that brings down the Dawn from the inside. Either way, this issue was pretty dope. Fun action, great art as always, and a hook to keep us waiting for Crimson Reign #1.

If you thought the Darth Vader issue had a cliffhanger then just wait until you get a load of this…Valance…is with Vader! (It’s essential to read that in Jerry Seinfeld’s voice). After getting blown apart by Boba, Ethan Sacks takes Valance through a feast of beautiful Villanelli art and emotional beats. This is some Star Wars smackdown in the vein of Chapter 14: The Tragedy , meaning it’s absolutely brutal and equally as fun to watch. Meanwhile in the other plot, T’onga’s crew continues to grow on me, they have just the right amount of both familiar and new faces for a team-up squad. Some Zuckuss and some Bossk, but also some Tassu Leech, make for a nice blend. Their ship though, the Edgehawk, doesn’t have to grow on me at all, I absolutely love it, it’s a stellar design. But then, in a rather gut wrenching scene, Valance has to experience the pains of his whole life again right before his eyes. He sees himself in Cadet Venn, and he also sees what little is left of himself, embodied in Venn, vented out an airlock. He is yet another tragic Star Wars character, an idealist trapped in a cycle of pain. Someone who could be as good as Han Solo but is dragged down by the world that shaped him. It’s ultimately why Valance is fighting so hard for Han, a man who didn’t care about what Valance had become, someone who saw the tin-man’s heart. And now, in his effort to do one good thing, he finds himself trapped under Vader once more, a servant of the Empire. Much like Star Wars #18, this is a top tier comic issue: the drama, the action, the twists; This is everything great about comics in a nutshell.

This one was fun, which is about as much as I can say for it. It’s an enjoyable read, but unfortunately, my least favorite of the companion issues. I’ve never been a huge IG fan, so maybe that’s it, the droid just never captured my attention like the other bounty hunters did. Let me know if any of you IG-88 heads out there felt as I do now when you read Boushh #1, which as a Boushh fan, I was all over. That being said, it’s still cool to watch as IG fights Boba Fett, and I did enjoy the existential ending of the issue. It leaves the character in a new place for canon, for what is a machine that can’t complete it’s assigned programming? Additionally, it’s always good to see Deva Lompop, rookie of the year character and glue holding the companion issues together. Other than that though, it was a bit shallow for me, the Crimson Dawn contingency plot felt a little contrived after the entirety of War of the Bounty Hunters. Especially when we know Han was but a fragment of Qi’ra’s galactic scale plan, it can feel a bit pointless, but perhaps that was exactly the point. It does play into the main theme of the issue, hmm, maybe I was wrong. Well anyway, it was still good fun and if you’re into IG-88, give it a whirl.

Surik’s Blade is this awesome…mostly. I have to add the mostly for this issue because it gave us the jenkiest Star Wars art in recent memory by far, frowny face Avar Kriss. I don’t know how this made it through the editing process but it’s uh, well, look for yourself at the bottom of the page. Other than that little hiccup though, The High Republic continues to blaze a trail into this new era, giving us entirely new Star Wars in a way not seen since the Dark Horse days. Lourna has unleashed the leveler on Terec and Ceret and, uh, they aren’t doing so well. At best, they’ve had the force taken out of them, at worst, they’re dead. Not a great range Cavan Scott has provided. In even better news, Skeer has gone full Anakin, oh wait…yeah, not great either. The dark path is forever dominating his destiny as he murders his way to Keeve, herself almost drained of life. The issue ends with Avar pulling a Rey/Ahsoka and freezing Lourna’s ship midair as she tries to escape justice yet again, what could possibly happen next? Definitely Badassery.  While I certainly don’t know, I’ll bet something bad will happen if I know anything about The High Republic. As far as beginnings of new arcs go, this one is darn good. I eagerly await to see how the rest of Jedi’s End plays out.

The Monster of Temple Peak #3

After being announced as a singular graphic novel, I’m growing tired of the fact this was broken up into parts, I wish I could read it all at once. My feelings are complicated to say the least. It’s a lot like the Journey to the Force Awakens young reader novels and their IDW adaptations. Smugglers Run and Weapon of a Jedi are great, Major Ematt and Sarco Plank getting their time to shine. I love it. But, if you broke up that story chapter by chapter and released it monthly, I’d start to have some issues, and that’s what’s happening with Temple Peak. It’s designed for a younger audience and so with the complete narrative I could, and likely will, enjoy it without any question, but dragging it out like this is hurting the narrative’s accessibility. Ty Yorrick is a great character, so more of her is good by default, and by and large, the actual meat and bones of this plot is solid. It’s just this pacing that’s killing the flow. I want to be more interested in Klias and Ty’s past, and it IS interesting, but you get so little of it per issue. Once issue #4 is out, I’ll give this whole thing a reread and render a more complete judgment then. Overall, this issue is still good, it’s just a bit disappointing to feel the tale dragged out.

And that’s this week’s comic Round-up!

On the next Round-up…who knows? Seriously, this whole supply chain thing is no fun, everyday comic release dates are changing to the point that you don’t know what’s coming out until the day of. It’s why I held off on making a round up to begin with, just one issue came out on wednesday, one, and FOUR were scheduled. It’s a bit of a mess, but I’m confident that when stuff actually does come out, it’ll be great. Happy comic reading, and until the next one, may the force be with you!